Consider this photo of Nik Wallenda, cycling across a tightrope: 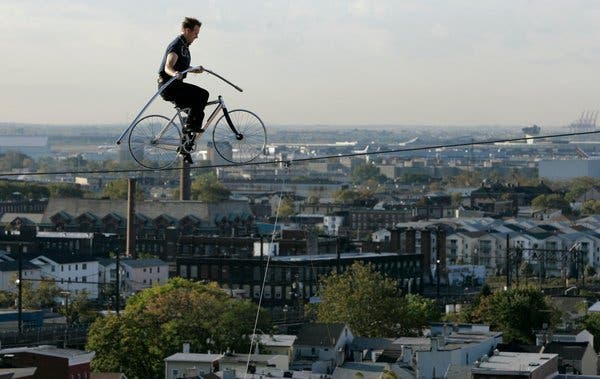 In the lecture I showed the dramatic transformation of Hong Kong harbour, as an example of fast economic growth.

Here is a 52 year time lapse of Kowloon peninsula: 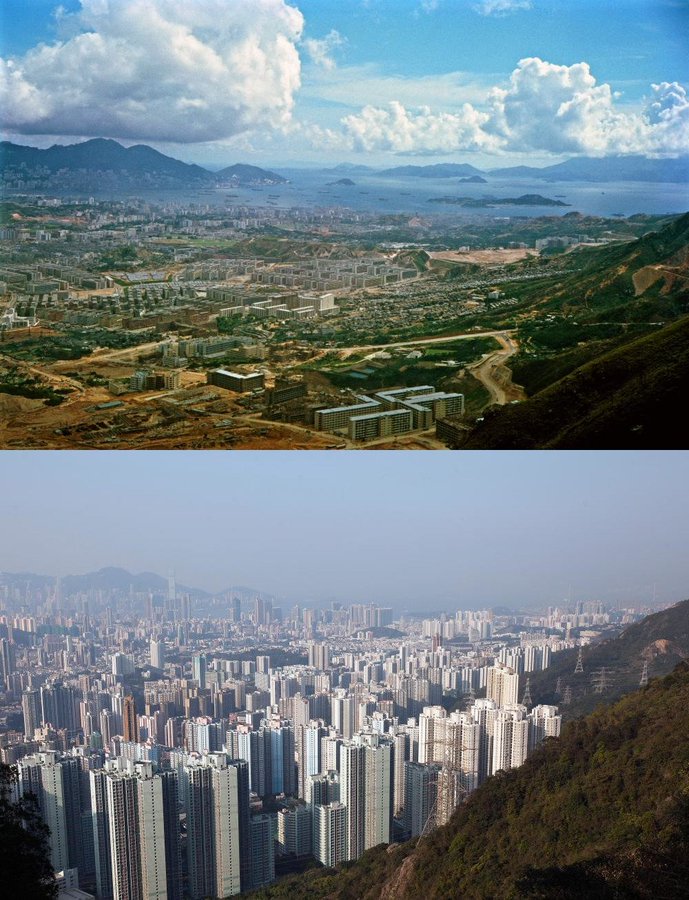 In 1945 Hong Kong was a poor territory. After war and Japanese occupation many of its 600,000 people were starving. They had no traditionally considered natural resources, and yet soon became a major manufacturing location, the busiest port in the world, and a centre of the global financial market.

According to reasonable internet sources, by 2018 Hong Kong’s GDP per capita had become bigger than the UK’s. 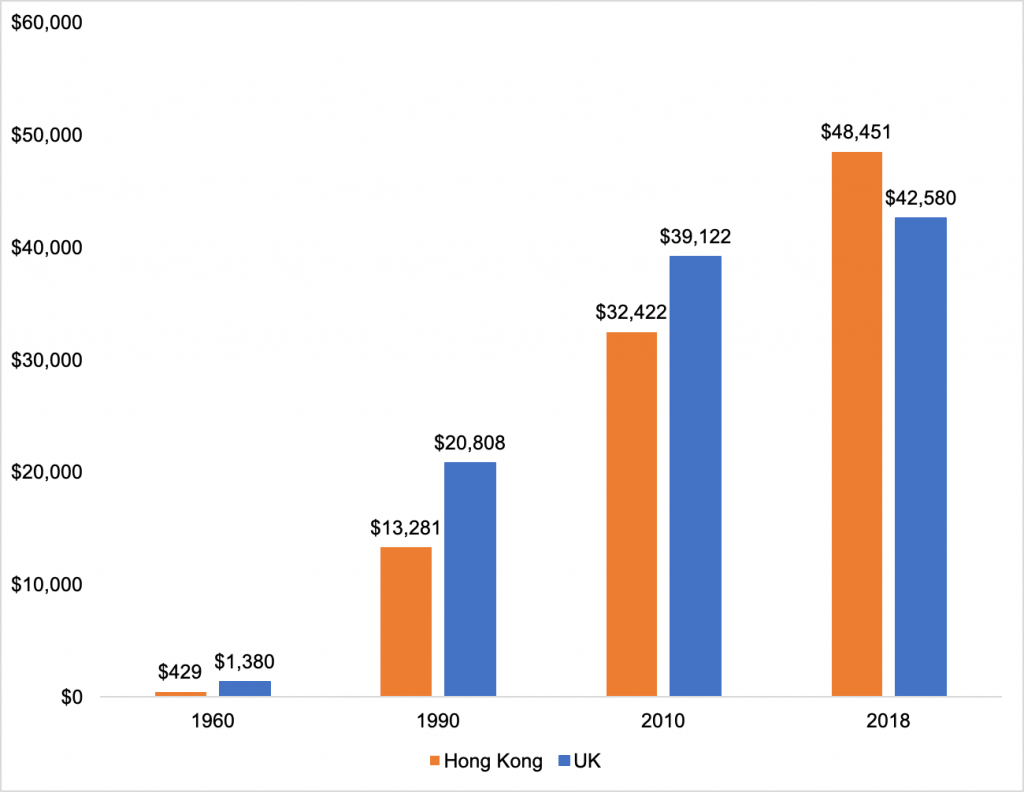 What happened? In 1945 civil servant John Cowperthwaite made Hong Kong a free port, which meant no tariffs for most goods, no export subsidies, and few restrictions on imports. Trade grew quickly.

On the supply side, it is not as though Hong Kong’s services lack in any way. The territory has the fourth best education system in the world, according to Pearson, and it ranks top of Bloomberg’s healthcare index. Its public transport system was ranked the world’s best last year, and it is consistently used as a model elsewhere (Frisby, 2019, p.13)

Perhaps even more powerfully, Hong Kong has been used as a model for other areas on mainland China. In 1980 Shenzhen became a “special economic zone” with low taxes and market-friendly regulation. The population rose from 30,000 to 13 million. Here’s Hong Kong in 12 amazing photos.

In 2014 I attended a Mont Pelerin Society meeting in Hong Kong. Here I am in front of that amazing skyline, with my undergraduate econ study partner! 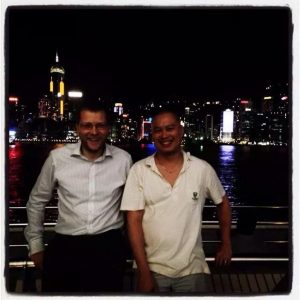 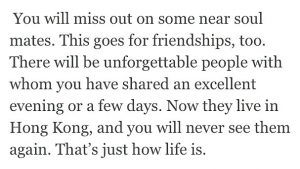 Unfortunately, events in Hong Kong now threaten that prosperity. For all of the gains of economic progress, there is always a threat or political intervention to undermine it.

Some other nice examples of side by side growth include this view of London from Greenwich, 40 years apart: 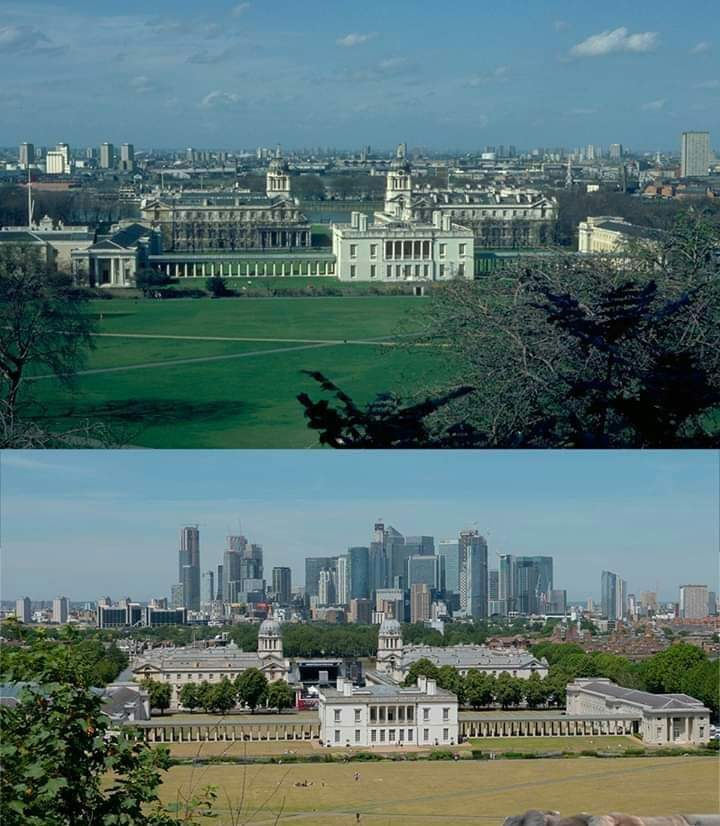 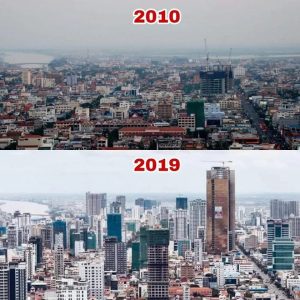 One of my favourite examples of how to notice intergenerational progress and increased material prosperity is Vic Wilcox’s thoughts on toilets, from David Lodge’s ‘Nice Work’ (1988) – see here.

Here is Tyler Cowen’s claim that economic growth is a moral imperative (which is based on his book, Stubborn Attachments):

For more on the economic influence of rabid supply siders…

Not everyone supports economic growth as a policy objective. Consider the following reading: