I am an Affiliate Faculty Member of the Microeconomics of Competitiveness program at Harvard Business School, and a big fan of Michael Porter – his work consistently reminds me of the importance of bringing clarity to management practice.

I also like his inclination for frameworks rather than models. If your goal is to interpret and assess, as opposed to measure and predict, a framework is a critical analytical tool. One that I especially like is his explanation for what determines competitiveness. For example, consider the following slide (which I believe originates from here). 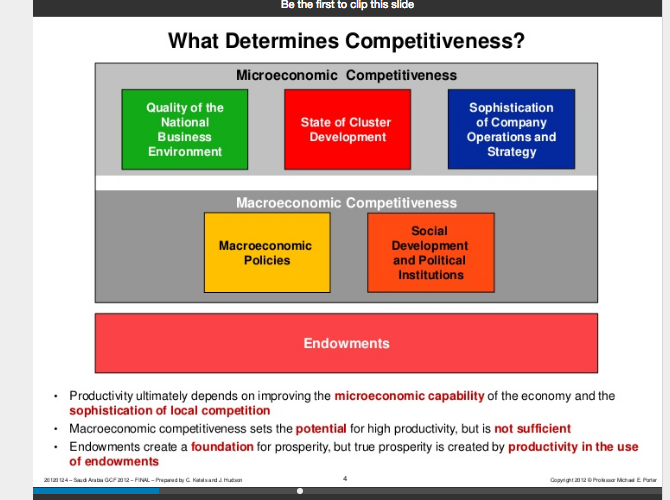 I’ve given this framework a lot of thought, but I don’t think it fits as neatly into the Diamond model as is often claimed. For example in this NBER paper Porter (and co-authors) present an enlarged version: 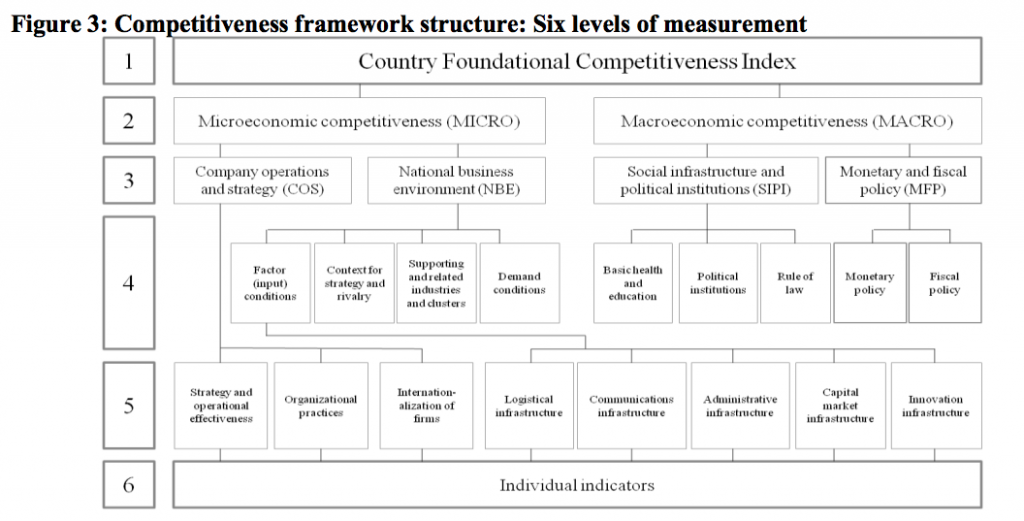 This clearly shows that the Diamond model is intended to be a more detailed view of the “Quality of the National Business Environment” segment. But consider something like nutrient rich soil, or a large natural harbour. One might think that constitutes an endowment. But it is also a relevant “Factor input condition”. Indeed what’s the difference between the “Supporting and Related industries” and “State of Cluster Development”? I suspect this is why Figure 3 above has dropped endowments and clusters, and renamed it a “Foundational Competitiveness Index”. I think this is a shame, because the “What Determines Competitiveness” slide is clearer, and more coherent, than the FCI.

I think Porter’s attempt to force fit the Diamond model into the Competitiveness index creates an opportunity to take the “What Determines Competitiveness” slide in a new direction. Indeed I think it complements nicely the “Growth is Like an iPhone” analogy:

In my attempts to merge the three level analogy with a template that my students can use in class, and with all appropriate nods to Prof. Porter, this is the “Country Competitiveness Dashboard“: 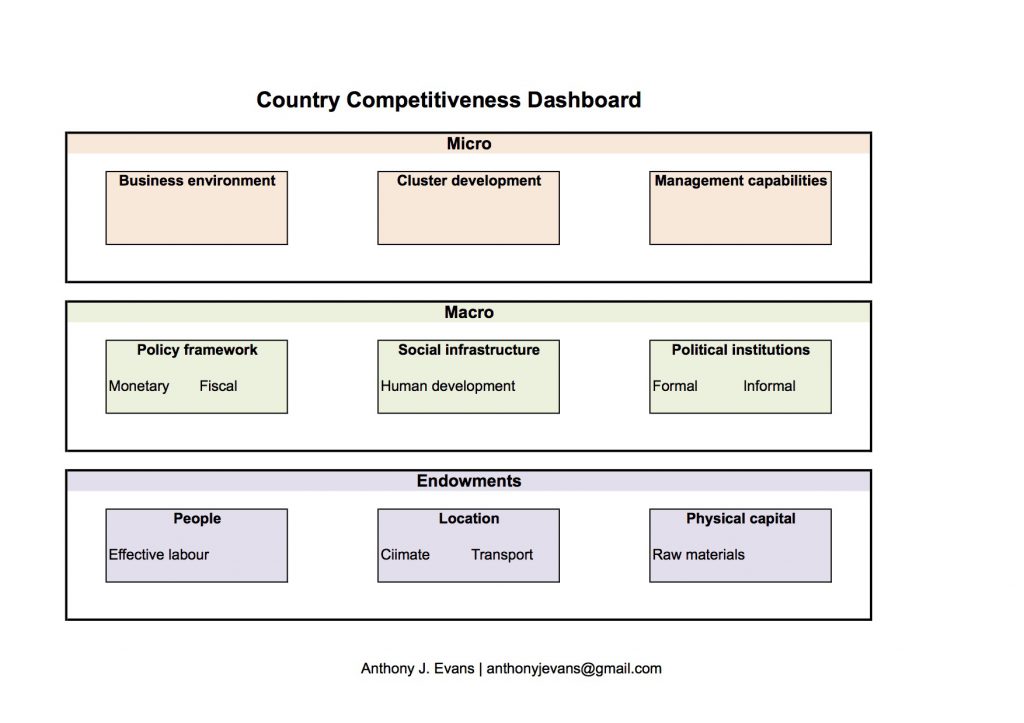 Rather than viewing the Diamond model as a subset of the “Business environment”, I see it more as a strategic tool that cuts across the whole Country Competitiveness Dashboard. In other words step 1 is to populate the dashboard, and ensure that you are covering all bases. Step 2 is to conduct a Diamond analysis – which is better suited at the cluster level than the national level anyway.

The endowments above are rooted in economic growth theory, but I am always struck at how important they seem to be when reading geopolitical accounts. The list below shows some of the typical go to areas when trying to understand the starting position of a country. 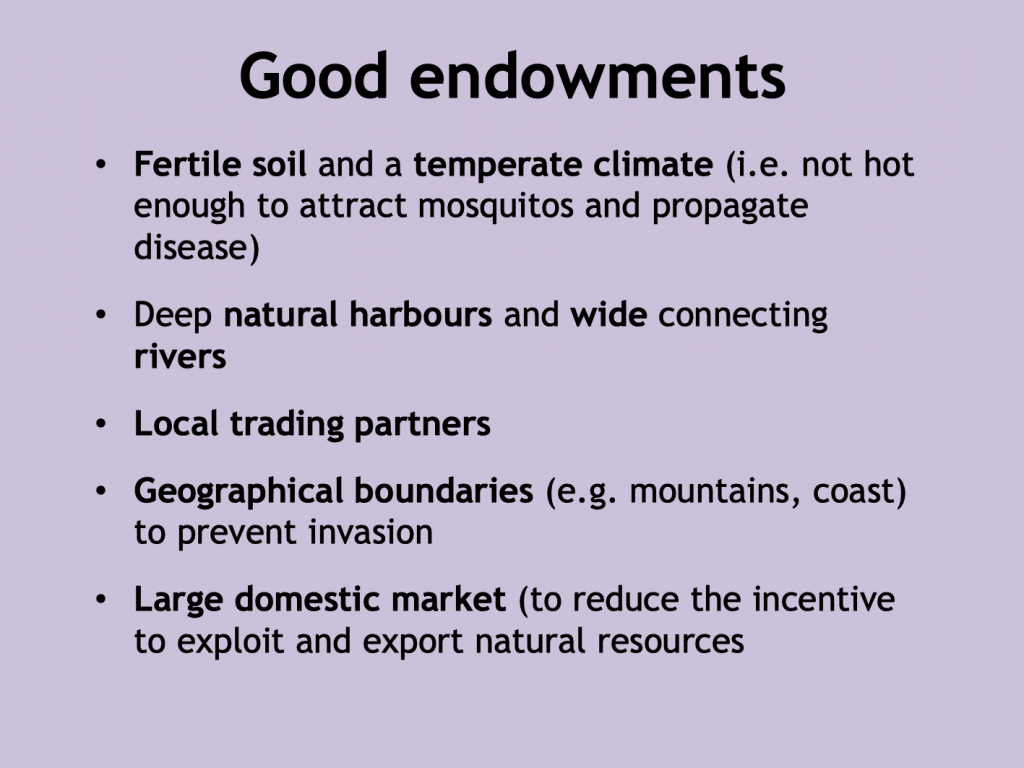 I think it’s important to understand competitiveness but it looks toward the supply side of the economy, which is much more important for long term growth than either monetary or fiscal policy. Two recent articles on the rise of new supply side thinking include:

Finally, it is well worth reading Paul Krugman’s, Competitiveness – a dangerous obsession (Foreign Affairs, March/April 1994). When treated as a mercantilist trade “strategy”, or the conflation of corporate planning with national level decision making, attention to competitiveness can lead us down the wrong path. But when competitiveness is wedded to our understanding of economic growth, and the conditions required for entrepreneurship to flourish, the competitiveness framework is immensely beneficial.

Having attended the MOC programme in 2013 and 2015, I then utilised some of the concepts on a special programme for a small private business school in Sofia, in 2016 and 2018. Little did I know that two other graduates from the MOC programme were running the full course through the University of Sofia during this period. And in 2021 Kiril Perkov and Assen Vassilev became Prime Minister and Finance Minister respectively. This is a great example of the clear links between classroom knowledge and policy leadership.