Here I am on a school exchange to Russia in the Spring of 1992: 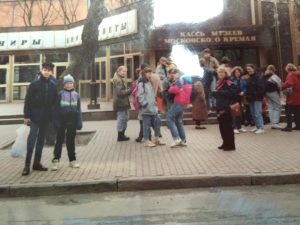 That trip prompted a fascination with alternative economic systems and the process by which a country can transition from communism to capitalism. This page is a collection of resources that have nurtured and fuelled my fascination with the topic of post-Soviet transition.

Traumazone, by Adam Curtis – this collection of BBC archival footage provides a fascinating and absorbing insight into how life changed for ordinary citizens of the Soviet Union, from 1985 through 1999.

Bald and Bankrupt – a British vlogger who travels around the former Soviet Union providing a glimpse at the legacy of communism. I particularly liked this video, filmed one day before the Russian invasion of Ukraine:

Collective (2020) – a quite stunning look at how public officials attempt to restore trust, and how investigative journalists pursue justice, for the victims of the 2015 Romanian nightclub fire.

How did Ceaușescu’s rule of Romania come to an end? – a 20 minute account of the Timisoara uprising that led to the toppling of the Ceausescu regime (to see his speech on December 21st and the exact moment where he realised that it was over, see here; to see him being tried, and shot, see here).

Good Bye Lenin! (2003) – Set in East Berlin, a woman falls into a coma and misses the fall of the Berlin Wall. When she awakens her children don’t want to shock her, and attempt to screen the economic changes occurring outside the bedroom window. This is an entertaining but poignant demonstration of the transition process and alternative economic systems.