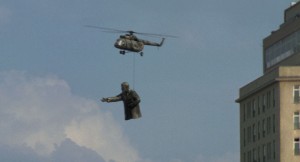 Films are a great way to extent intellectual curiosity beyond the classroom. I’ve listed the following movies because they satisfy two criteria. Firstly, I think that they are excellent ways to reflect upon key issues in the art of business management – I have utilised these films to probe my thinking about areas of my research and teaching, and to that end I feel screenings can be incorporated into either a discussion group or classroom environment. Secondly, they all pass a basic hurdle in terms of entertainment and quality. However you utilise these recommendations I hope you enjoy them!

Is this story an allegory for monetary systems? Some claim that Dorothy represents the everyman America, the Scarecrow represents farmers, the Tin Woodman industrialists, and the Lion is William Jennings Bryan (Democratic Presidential candidate). At a time when America feared deflation, the yellow brick road to Oz is a reference to the gold standard and Washington DC. Rather than reinstate the silver standard (proposed by Bryan at the time) we see the Emerald City of greenbacks and the Wizard of Oz himself (the President) exposed as fraud. Regardless, the shift from black and white to colour must have been one of the most magical cinematic moments of all time.

Highly decorated and intense portrayal of the decision-making process in the jury room of a murder trial. A simplistic view is that it exposes blatant and latent prejudice, but can also be viewed as a warning against groupthink and a desire to build consensus. Ultimately it’s the vindication of the role of a Devil’s Advocate in a group setting. According to Krastev & Holmes (2019, p.116) it “is a classic expression of American liberalism. It is a symphony of praise for the power of free individuals to fight for truth and against class and ethnic prejudice. It is a cinematic tribute to rational argument, attention to evidence and disinterested justice… it remains a powerful if highly stylised defence of American liberal values”

A great account of the diffusion of ideas and the treatment of knowledge as a resource. Based on Umberto Eco’s book, I see it as a version of the Fatal Conceit, where those in positions of authority pervert Truth and Reason. It also shows the dangers of historical revisionism and thus the importance of reading the classics.

Some see this as the embodiment of capitalism, but to me it revealed how some groups view capitalism – by comparing the likeliness of the events depicted in the film to actual business practice, some nuances emerge. Greed doesn’t need to be good for capitalism to work.

An animated film featuring the voices of Woody Allen, Sylvester Stallone, Sharon Stone, Gene Hackman and Jennifer Lopez. The protagonist, “Z-4195” is an individualist who challenges the hierarchical structure of the colony, demonstrating a modern parable of rights, responsibilities and ultimately of freedom. ‘A Bug’s Life’ came out at the same time and captured more attention, but I found Antz more charming.

The best film I’ve seen that demonstrates the monotony and fatalism of typical office life. All managers should watch this, and realise that Bill Lumbergh isn’t a fiction. The film bombed at the box office, was slated by the New York Times, but has become a cult classic.

Set in East Berlin, a woman falls into a coma and misses the fall of the Berlin Wall. When she awakens her children don’t want to shock her, and attempt to screen the economic changes occurring outside the bedroom window. This is an entertaining but poignant demonstration of the transition process and alternative economic systems.

The film is less moralising than the book, but there’s an undercurrent that demonises the protagonist for his profit seeking. Aside from the majestic performance by Daniel Day-Lewis this raises questions about risk-taking, speculation, eminent domain and the relationship between business and family management.

A Chechen “remake” of 12 Angry Men, where the accused’s fate is determined not by the abstract concept of justice, but by the actions of a concerted protector. Compassion and concern for the orphaned child wouldn’t be delivered by “justice being done” but by helping him survive. The dilemma facing the jury is whether they’d take responsibility for the consequences of granting his freedom.

An enthralling depiction of the East German Stasi, with the main character questioning the implementation of his ideals whilst spying on a playwright. There’s no neat ideological conclusion, but a challenging portrayal of espionage.

A pretty pointless crime movie but it raises some interesting discussion points about the mechanisms of monetary policy and the ethical implications of macroeconomic policy.

Not seen it yet, but Tyler Cowen has.

A wonderfully presented tale of eminent domain and the bureaucracy and corruption that come with it. I was expecting a battle between man and the state, but it was more of a Vodka-fuelled truel than a duel. (Also contains a fascinating side plot with regard to how it was funded.)

Attractive women who unfathomably puts up with all kinds of family drama uses nepotism and duplicity to recklessly embark on a scheme to sell some mops.

As we root for her to succeed we see that a myopic addiction to commercial success is a much more socially beneficial vice than alcoholism, drug use or destructive violence.

A powerful example of the struggles faced by an entrepreneur, and the problems caused by excessive IP protection.

A nicely tense example of a moral dilemma, which also serves as a brilliant case study in decision-making under pressure and chains of command. I would be intrigued to see how the viewer’s own judgment changes throughout the course of the film, and the verdict on the organisational structure on display.

Michael Keaton stars in the true story of how salesman Ray Kroc notices the burger ordering system created by Mac and Dick McDonald (standardized production in advance! no cutlery!) and turns it into a global franchising behemoth. Provides a wonderful opportunity to reflect on whether Kroc is a hero (for creating wealth, for getting things done) or a villain (for using the ideas of others and impinging their interests and rights).

A tale of corruption from Cluj, Romania. Should a loving father make an ethically compromised decision that allows his daughter to receive a scholarship that she totally deserves, but is in danger of losing through no fault of her own? As we see, “If she wants to live her life in a normal country, she first has to lower herself to the humiliatingly unethical normality that reigns in the country of her birth” (Krastev & Holmes, 2019, p.50).

A tale of the individual vs. the collective – should the choir member with the terrible voice stay quiet for the good of the team? Is it better to be carried by others than to not be allowed to play? How should people find their voice in a collectivist setting?

A chillingly funny case study of collective decision making within a leadership vacuum. Molotov’s speech, and the manner in which consensus is formed is a wonderfully applicable example of herding effects and deference.

In addition to the above I’ll indulge myself by listing some films that aren’t necessarily MBA curricula, but I’ve deeply enjoyed nevertheless. This is my own algorithm, whereby if you like several of the films within a cluster, you’re likely to enjoy the ones that you haven’t seen.

I’m also a fan of Emir Kusterica and my ranking of his 4 best films is: