The chief goal of any academic is to have scholarly impact – to be published in elite journals and for your work to be read, shared, and cited. But it’s also common to seek wider impact, and publicise those findings and implications with society at large.

One problem is that our research topics are often driven by the existing literature. Therefore pursuing an academic career can easily become a slide towards wider irrelevance. As we focus on scaling the ivory tower, we lose track of what anyone else cares about. Before we realise it, the landscape looks like this: 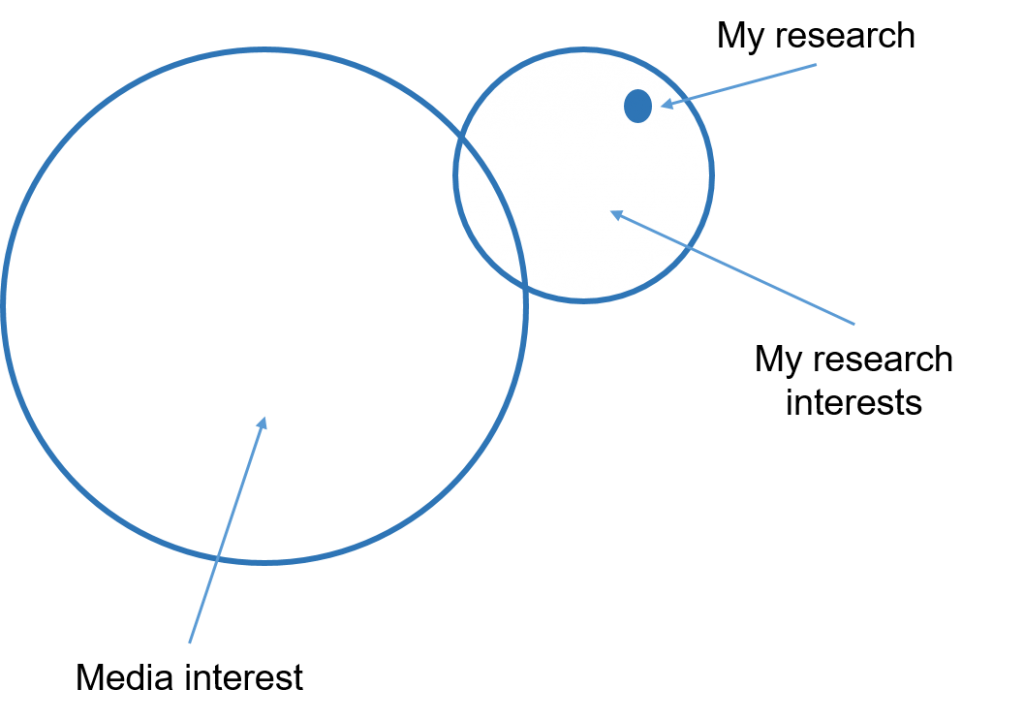 Perhaps, if we’re lucky, we can identify the areas where media interest overlaps with our research interests. Therefore we can create a list of topics we feel qualified to talk about, and seek media engagements. We can be available for comment and publish op-eds on newsworthy issues. But be careful. We might have made scholarly contributions to the field, and we may well be experts, but those topics won’t map perfectly onto “my research”.

Once we abandon the solid grounding of our published competence, we’ve started a dangerous journey. There is a risk that we end up like this: 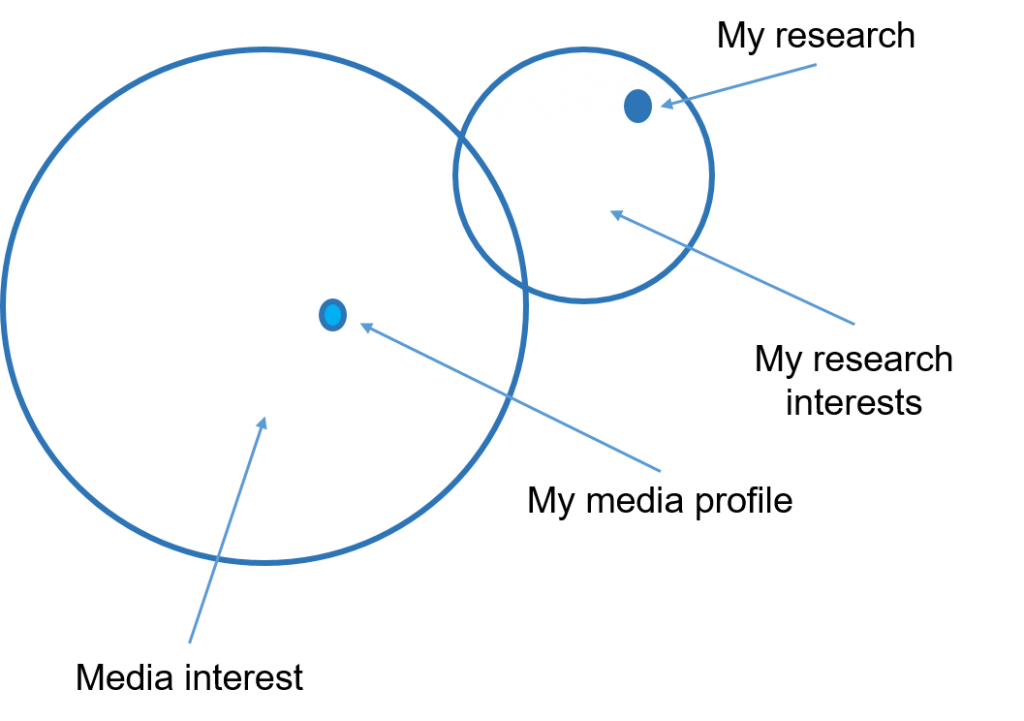 By being receptive to media engagements we are opening ourselves to the pull of opportunity. But what your PR company deem to be a “hit” (i.e. being quoted in an article in a magazine no one cares about) is not really a “hit”, and a desire to do this tempts us to stray outside our areas of expertise. If someone wants a comment we provide it – it builds the brand and it’s fun. The ego is nourished, we feel that we’re representing our institution, we’re being productive. (However our titles and status carry authority, and the wider public are likely to confuse the light blue dot for a dark blue dot. I believe that it is unethical to utilise our credentials for matters outside of one’s expertise. I could add links here, but I won’t…).

The holy grail, therefore, is to end up like this: 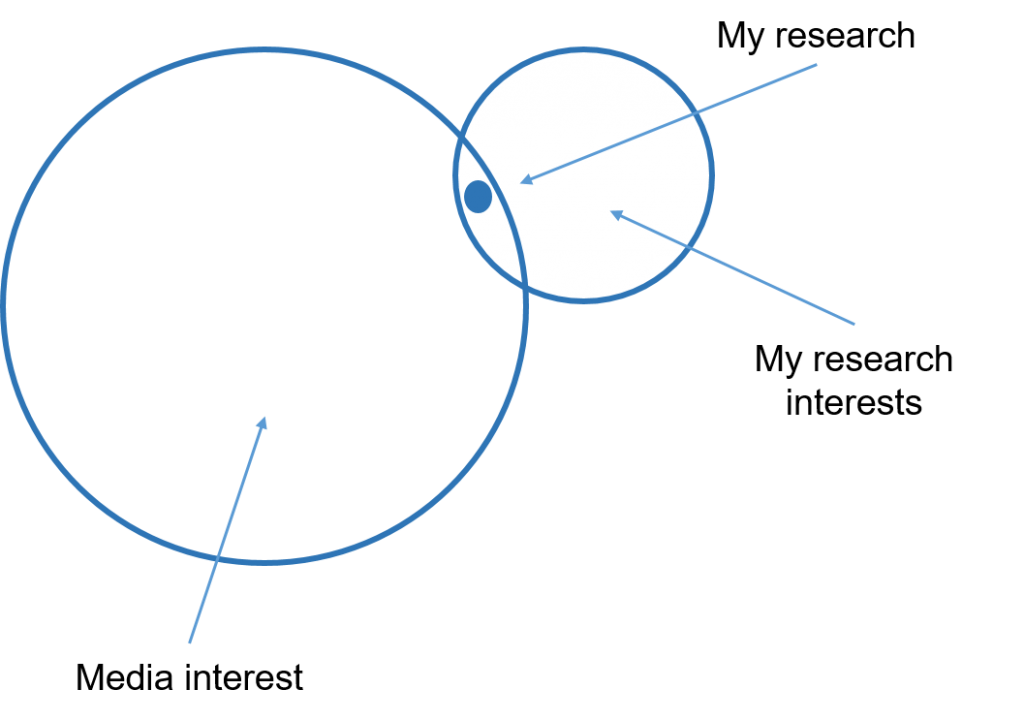 I think fame seeking academics have two potential strategies. However both of them carry risks.

Personally, I am not sure what to do. I’ve tried to be entrepreneurial by choosing a few topics that I think have the potential to become important, and I am working hard to improve the quality of my scholarly work. But I’m largely abandoning the aim of creating a media profile for my research.

Let’s be honest, the media do not care about academic research. When we issue press releases for a new publication it’s because we want to share it. However even if it’s published in an open access journal newspapers will rarely link to the actual paper anyway. Even PR companies act as gatekeepers for the actual paper, and promote the top line findings without allowing third parties to actually verify them. We have a crisis of scientific replication, and yet there’s a complete disjoint between how research is presented and our ability to engage with it.

I am aware that my profession and institution are underrepresented by people who aren’t white males. And as a white male I should reflect on my role in that. As I lose the novelty of youth I question whether the best use of my time is supplying free content to unremarkable publications by crowding out other voices.

Pivoting away from attempts to promote our research profile, however, doesn’t mean wallowing in academic irrelevance, and it doesn’t mean giving up on communicating economic ideas. It just means a recognition that our biggest value to the media is almost certainly a result of our teaching knowledge rather than our research findings. This is because the pool of media interest in which we’re able to play in is much wider when we act as teachers rather than researchers.

This may seems as though I’m risking becoming a light blue dot. But wearing our teaching hats massively expands our scope of “expertise”, provided we recognise the topics will be broader. As Steve Horwitz recently said on Facebook,

Advice for young economists who wonder whether they have enough expertise on a topic to do media requests on it: If you think you can explain your views to an Intro class, you can do media on that topic.

My caveat to that was:

So rather than send our new PR agency a list of my research topics, I’ve sent the following:

I also think it’s potentially legitimate to comment on hot topics such as:

Provided you limit your comments to the simple application of the economic way of thinking. However I fear that this won’t be providing journalists with what they want (which is a hook, or something controversial), and there’s a very real danger that you do turn into a light blue dot. So I personally avoid these topics. Leave them for commentators and opinion leaders and academic experts in the field. Don’t wade in as one masquerading as the other.

Finally, Steve Horwitz is also right to point out that such media engagements are also advantageous for the institution. Indeed I’ve stopped seeing media work as part of my research profile. It’s actually organisational (and civic) citizenship.