Half of all U.S. publicly traded companies have disappeared within ten years of entering the market (West, 2017, p.12)

The point of this session is to critically examine the economic theory of competition, by contrasting “competition as a market structure”, with “competition as a behavioural activity”. This turns the debate away from market concentration, towards the issue of contestability and sustained competitive advantage. We also see that competition is the driving force of the market process, and how this relates to regulation. Indeed a cynical view is that anti-trust is simply the strategic use of government powers by incumbent firms to restrict competition.

The lecture mentioned the tricky case of patents, which are one of three areas of intellectual property:

A timely example of anti-trust is the tech industry. See this article by Russell Brandom explaining the case against Amazon, Apple, Facebook and Google. By contrast, Megan McArdle says ‘Yes, Google has a monopoly: who cares?‘ I recommend Ben Evans’ discussion of tech giants and definitions of market share, and this tl:dr primer on why mergers and acquisitions are so important for the tech industry by the International Centre for Law and Economics.

Prior to becoming Chair of the Federal Trade Commission, Lina Khan, wrote a 2017 article ‘Amazon’s Anti-Trust Paradox‘ that pointed out that the traditional concern of competition authorities – that monopolists would use their market power to raise prices – is inappropriate when considering modern technology platforms. However, her stringent views on regulatory issues seem to neglect the concept of creative destruction. There’s a long list of examples of companies that appeared to be in a dominant position, undermined by the perennial force of competition.

Bertrand competition shows how the act of competition can take place even with just two companies. In fact, the concept of competition doesn’t rely on the number of competitors at all. For example this advert reveals how Usain Bolt’s lack of “competition” doesn’t prevent him improving himself. 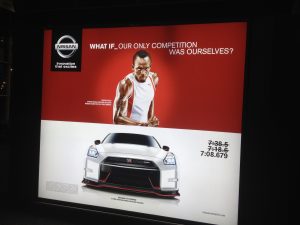 This is a good explanation of the side by side market/firm diagram, and the process by which perfectly competitive firms make zero profit in equilibrium.

Some good examples of daft occupational licensing are in this Twitter thread.

This is a nice example of the difference between complements and substitutes, and whether external economies of scale mean that more competition benefits the competitors:

once i asked an escape room owner whether they got annoyed when other escape rooms opened in their area and competed for their business
and they said “nah – if someone makes a good escape room, then the people who play it are gonna want to play more”
i think about that a lot