This webpage gathers some key resources to help you understand what a NGDP target is, and why I think central banks should be more open to adopting them. I am convinced that delivering macroeconomic stability should be the prime objective of any central bank, and that an NGDP target would be a good way to achieve this. Let’s see why…

What is an NGDP target?

You probably know that GDP stands for Gross Domestic Product. This is the conventional way of measuring economic activity, and reveals the market value of final goods. When we’re interested in whether people are getting richer or poorer, we look at real GDP, which strips out the effects of inflation. This allows us to make meaningful comparisons about the productive performance of an economy across different time periods, and the chart below shows what’s happened to GDP in the UK from 1997-2019:

The real growth rate for the UK from 1949-2019 averaged 2.5%, but more recently it seems to be below this. While this may be a concern, in normal times it is driven by factors outside the control of central banks (such as the productivity of labour and capital).

Central banks do, however, have a large influence over the nominal growth rate, which is the cash value of economic activity (i.e. without stripping out the effects of inflation). The chart below shows annual NGDP growth from 1997-2022.

Now, here are the big claims I wish to make:

(i) The reason that economic performance was reasonably good from 1997-2008 was because NGDP growth was stable.

(ii) The subsequent and more recent poor performance was due to having left that 5% growth path.

What do central banks do?

Most central banks utilise an inflation target, where their primary objective is to deliver low and stable inflation. And this is how we typically judge whether they are doing their job. For example,

However, many economists question whether this is the best way to conduct monetary policy. Instead of trying to keep consumer prices stable and assume that other important variables will follow from that, an NGDP target aims for a stable environment for all wage and debt contracts, because labour and credit markets are more important for economic planning than a specific set of consumer prices. Indeed, NGDP is less volatile than CPI, and NGDP is more relevant for concerns about debt sustainability.

It is therefore interesting to see that even back in 2012 NGDP targets were receiving attention from important central bankers:

Consider the following “equation of exchange” (where each variable refers to a growth rate):

The power of this equation is that it rests on a tautology, which is that the total spending across the entire economy must be equal to total receipts. That being the case, we can break down total spending into two components: the amount of money that is available to spend (M), and people’s desire to spend the money already in circulation (V). Spending rises when more money gets created, or if people choose to spend more of what they already have. Central banks therefore stimulate the economy either by Quantitative Easing (more M) or reducing interest rates (more V). This “total spending” is sometimes referred to as aggregate demand, but notice that it is equal to the combined rate of inflation (P) and real GDP growth (Y). It is through their ability to determine the amount of aggregate demand that central banks will directly affect nominal GDP (P+Y). And since one person’s expenditure is another’s income, another term for NGDP is nominal income.

For more on using this equation as a foundation for understanding macroeconomic policy objectives and performance, see here.

Nominal income targets first became popular in the 1980s, when the prevailing focus was targeting the money supply (as pointed out in this presentation by Jeff Frankel). Some big name economists gave them attention, including in the following famous articles: (for a longer list see here)

More recently, following the global financial crisis, there has been a second wave of interest in NGDP targets, for example:

This second wave has come in the context of perceived failures of inflation targets.

We can therefore witness a steady evolution in thought: perhaps instead of being bound by a money growth rule (M), or an inflation target (P), the central bank should instead target nominal income (P+Y). This means that real productivity will determine the split between inflation and real growth – if productivity is strong then inflation will be low, but when there’s a real business cycle slow down inflation is permitted to rise. These adjustments will take place such that NGDP remains stable. This video by MoneyWeek does a nice job explaining how this balancing act is already part of the Fed’s perview:

The increased influence of NGDP…

Scott Sumner has been described by The Atlantic as “the blogger who saved the economy” due to the influence he had over the Fed’s late 2012 QE3 program. You can see a great overview of the rise of Sumner here:

A key thing that he emphasises is that it’s not just the fact the nominal income is a more important variable for macro stability than price stability, but that the expected growth path of a variable is more important than a rate. In other words, if a central bank “misses” a 2% target the question is whether it tries to get back to 2% and consider that enough, or whether they try to get back to where things would have been had the 2% growth path continued. In technical terms NGDP advocates want a level target and, as Mark Carney’s chart below shows, to not let bygones be bygones. 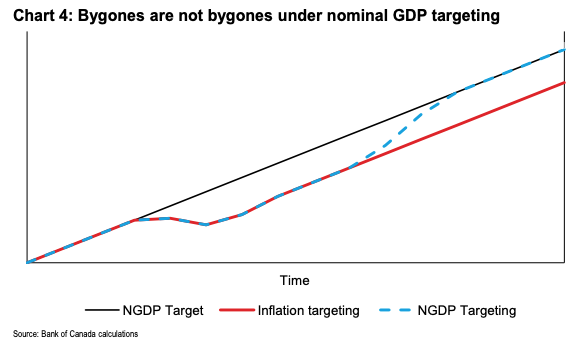 (Astute readers will point out that you could have an inflation level target and achieve the same result, which is indeed the case. But for simplicity we compare the status quo inflation growth rate target and the potential NGDP level target).

So even though thinking in growth rates is easier to communicate, the power of an NGDP level target is best shown when we look at absolute units. And as the chart below shows the UK deviated from a hypothetical 4% growth path and failed to catch back up again. That NGDP gap represents a permanent loss of economic activity relative to the public’s prior expectations, and forces an unnecessary and painful slowdown. 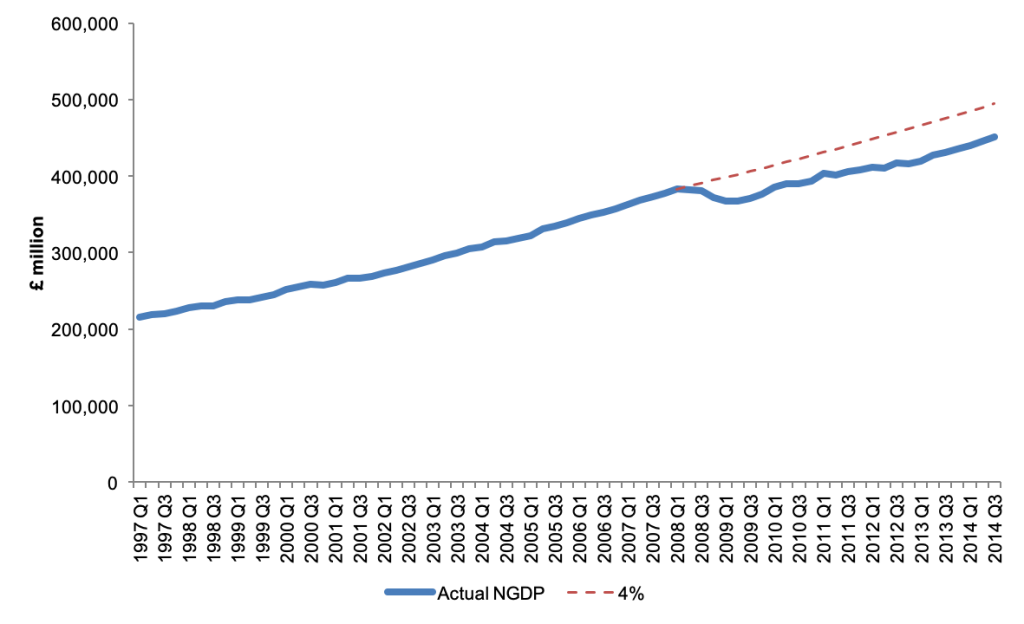 In May 2013 I organised a conference in Copenhagen, hosted by Danske Bank. It involved Lars Christensen as well as Sam Bowman and Ben Southwood from the Adam Smith Institute. Lars coined the term “Market Monetarism” and became known as an early and influential advocate via his famous blog, “The Market Monetarist“. Sam advocated an NGDP target in a letter published by the Financial Times in 2014. And here is a nice video of Ben Southwood explaining how a NGDP target would mean that central banks don’t have to try to work out which shocks to respond to and which to ignore:

Also around this time, in 2016, the ASI published my policy report, Sound Money, which contained an NGDP proposal for the UK.

Some of the key questions to address when considering an NGDP target are as follows:

Considering all of these factors, I advocated a 2% average growth in NGDP expectations over a 5 year rolling period. The mains reasons were:

My proposal was trying to strike a balance between those who advocate that total spending is stable (i.e. a 0% growth target) and those who take the current inflation target (2%) and the typical long term real growth rate (~2%) to create a 4% NGDP target. But this idea didn’t catch on, and in hindsight it’s probably better to go for one or the other. Regardless, I was delighted to see that the proposals received extensive media coverage:

My ASI proposal discussed NGDP targets within the context of wider reforms. I viewed an NGDP target as a step in the right direction away from arbitrary and discretionary monetary policy decisions, and toward a more automated, rule-based system. Some important additional elements relating to implementation included:

In June 2020 I participated in a webinar, hosted by the Adam Smith Institute, about NGDP targeting. I wouldn’t expect you to watch the entire recording, but it was a real thrill to share a panel with Scott Sumner.

In September 2021 Scott Sumner was interviewed by Larry White for the Mercatus Center podcast. I recommend the whole episode, but what I found most interesting was Scott’s optimistic take on the influence of NGDP targets. He made a few key points:

I don’t think this final point is appreciated enough – we’ve experienced a historically unprecedented collapse in economic activity and yet this didn’t have an immediate, obvious, and cataclysmic effect on the banking system, the housing market,  unemployment, or corporate or personal bankruptcy levels. Had central banks repeated the mistake of 2008, and allowed NGDP growth expectations to fall, then the consequences would have been horrific. But they heeded the lesson, and reassured markets that NGDP would soon return to the previous trend path.

That said, if we look at the figures for 2022 we can see that according to David Beckworth’s excellent data set actual NGDP is now exceeding the amount it would be in order to be neutral. This suggests that the Fed are providing too much support, risking higher inflation and financial exuberance. 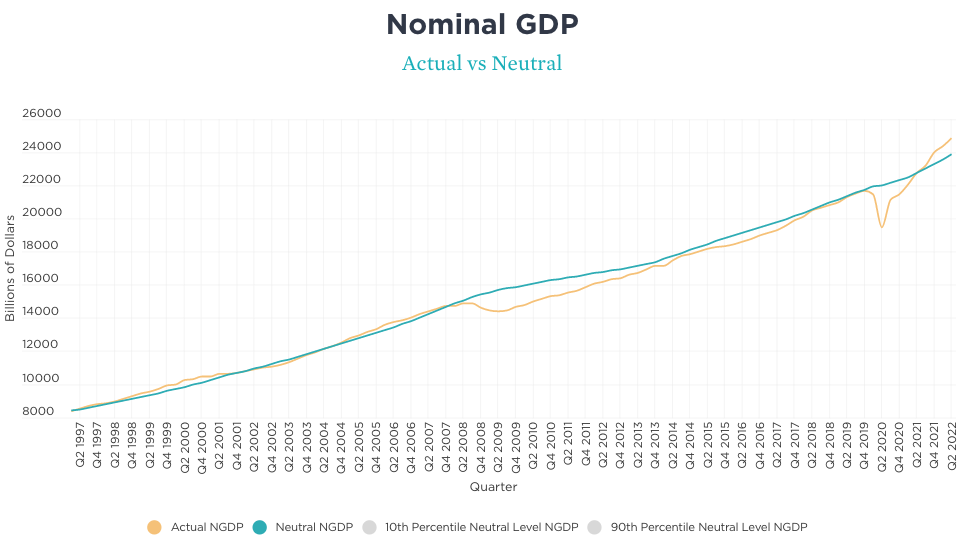 Whether or not central banks adopt an explicit NGDP target this data is playing a crucial role in our attempt to assess and inform policy decisions. I’m proud to have contributed to this research agenda.